Gifted in perpetuity to the people of Seattle, Charles and Emma Frye’s art became the founding collection of the Frye Art Museum, which opened on February 8, 1952 as the first free art museum in Seattle.

Over the years, the museum has intentionally focused on broadening its holdings of contemporary art to include previously underrepresented identities, perspectives, and forms of expression. 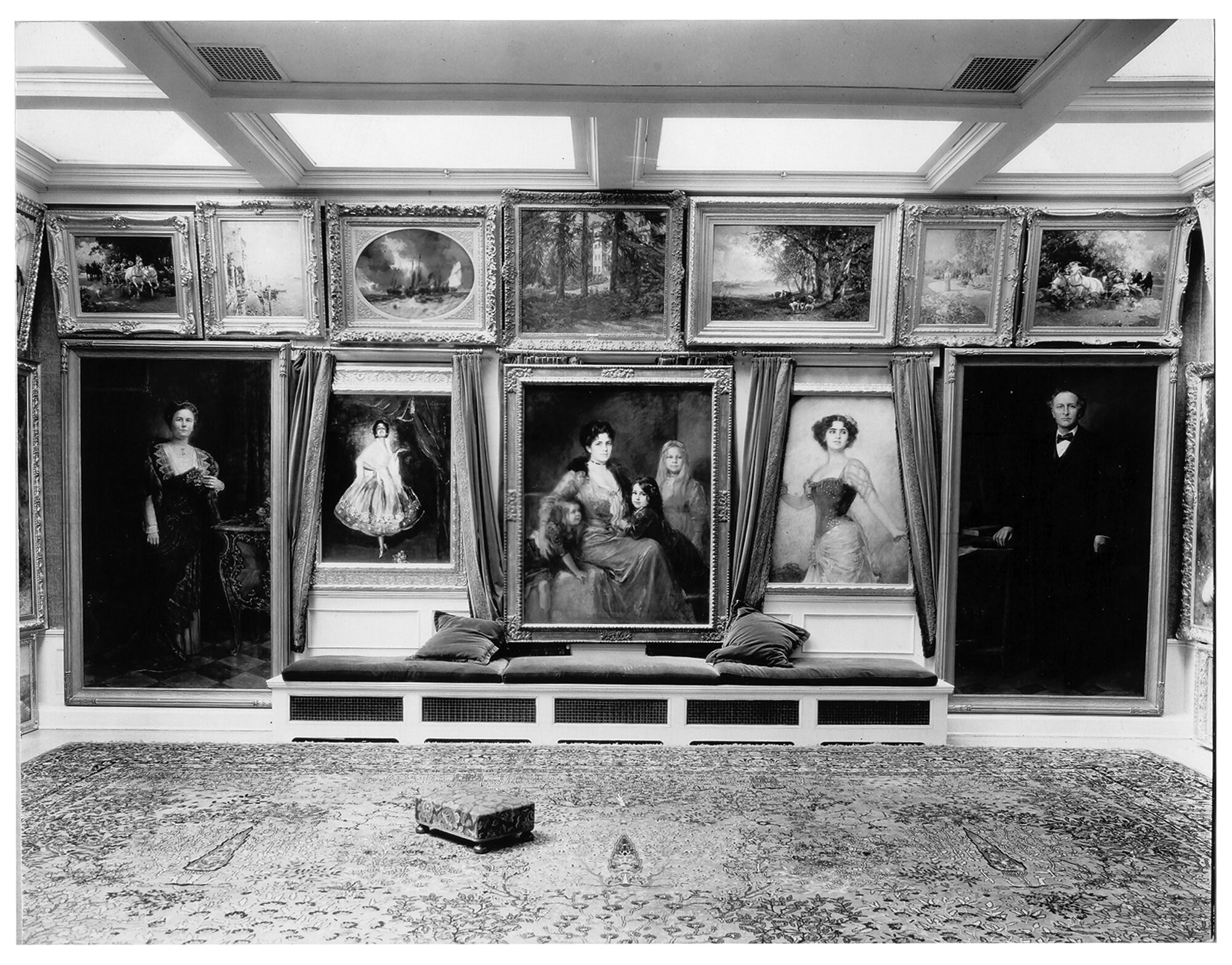 The Frye is committed to supporting and showcasing contemporary art, with boundary pushing shows and installations that completely transform the space. This sense of risk-taking and highlighting of the contemporary, however, is not reflected in the Frye’s brand voice.

The Frye's current branding does not reflect its bold and inclusive vision. The museum would benefit from a stronger brand voice to help them stand out in a metropolitan area and appeal to a younger audience, bringing in a new wave of potential future members and donors.

A cohesive and flexible brand system that reflects the mission and voice of the Frye Art Museum.

Our solution to this challenge was to create a shape library. Each shape when used independently would represent the bold idea within an open space. For "brand forward" deliverables the shape is filled in with a brand color. For "art forward" deliverables that shaped is used as a window or a frame that highlights an artist's work.

These "brand forward" deliverables don't feature any art from the museum. They are all about showcasing the Frye and building brand recognition. 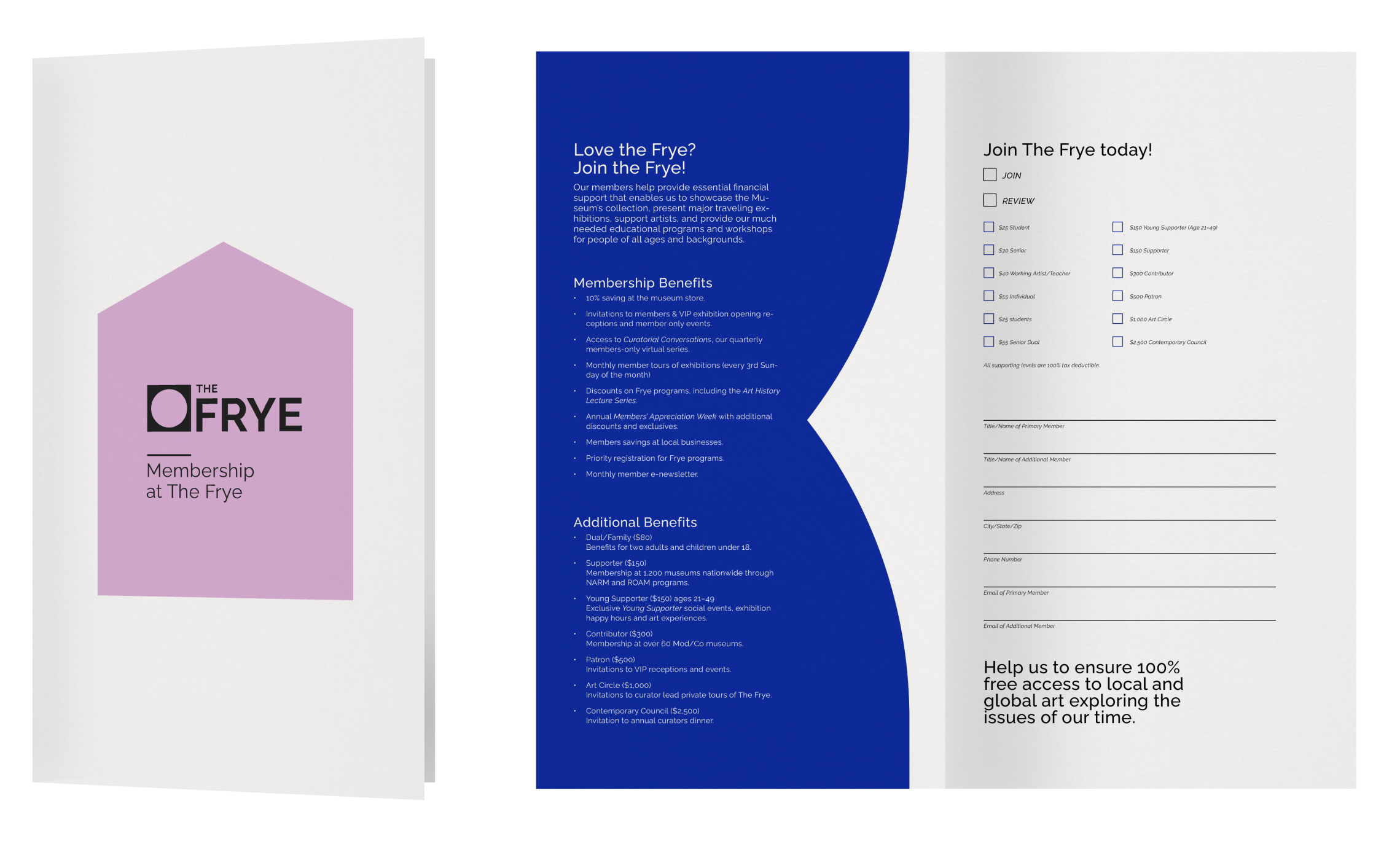 A key deliverable for this project was to create a book of brand standards and guidelines. This book clearly lays out the Frye's new design system for future use.

These "art forward" deliverables showcase work on view at the museum. While they still maintain a brand voice from the Frye, it is a softer voice so that the artwork is the focus. 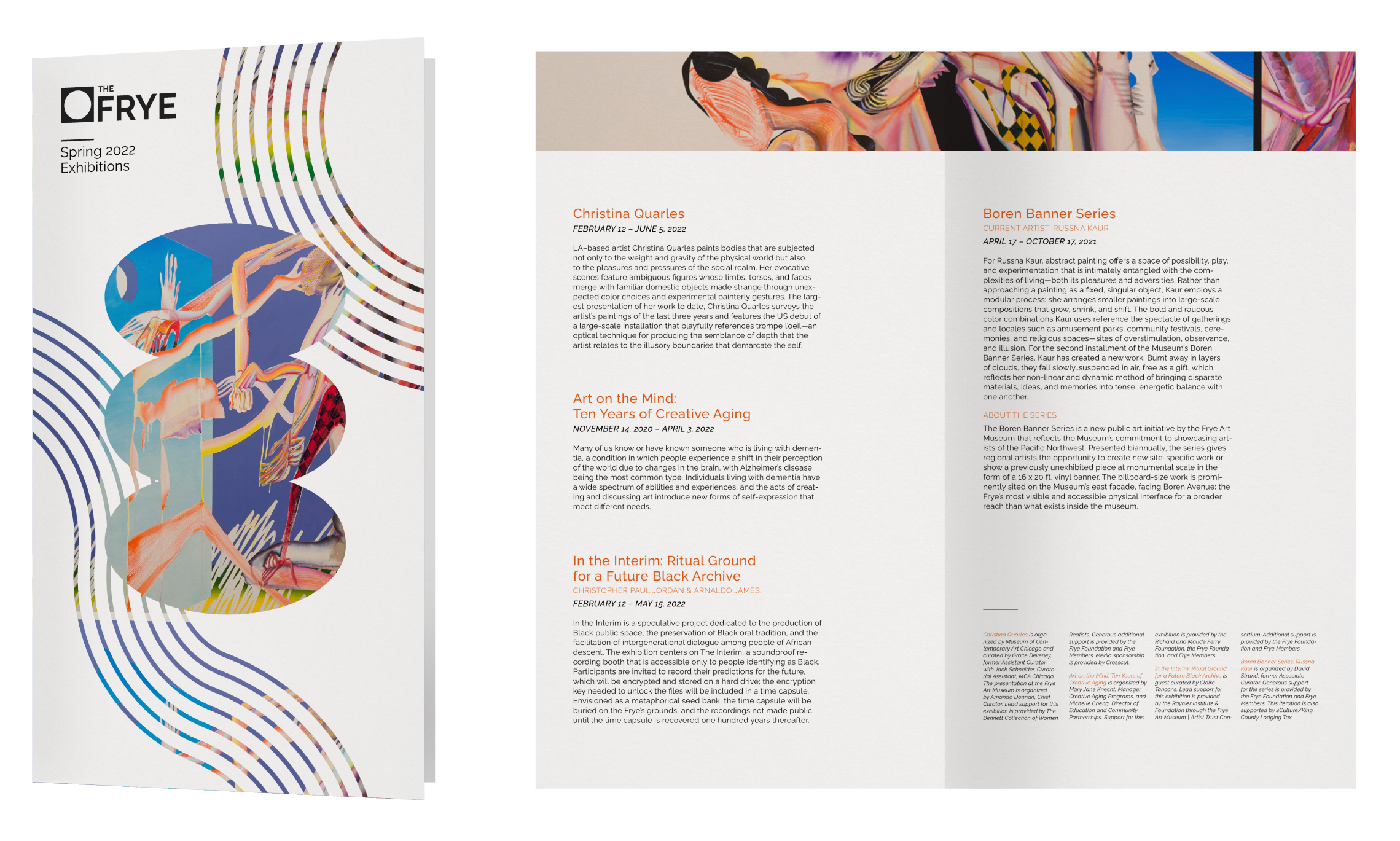 As a way to further tie in some of the new Frye band elements and develop brand recognition we explored environmental components that could exist in the physical space of the museum. 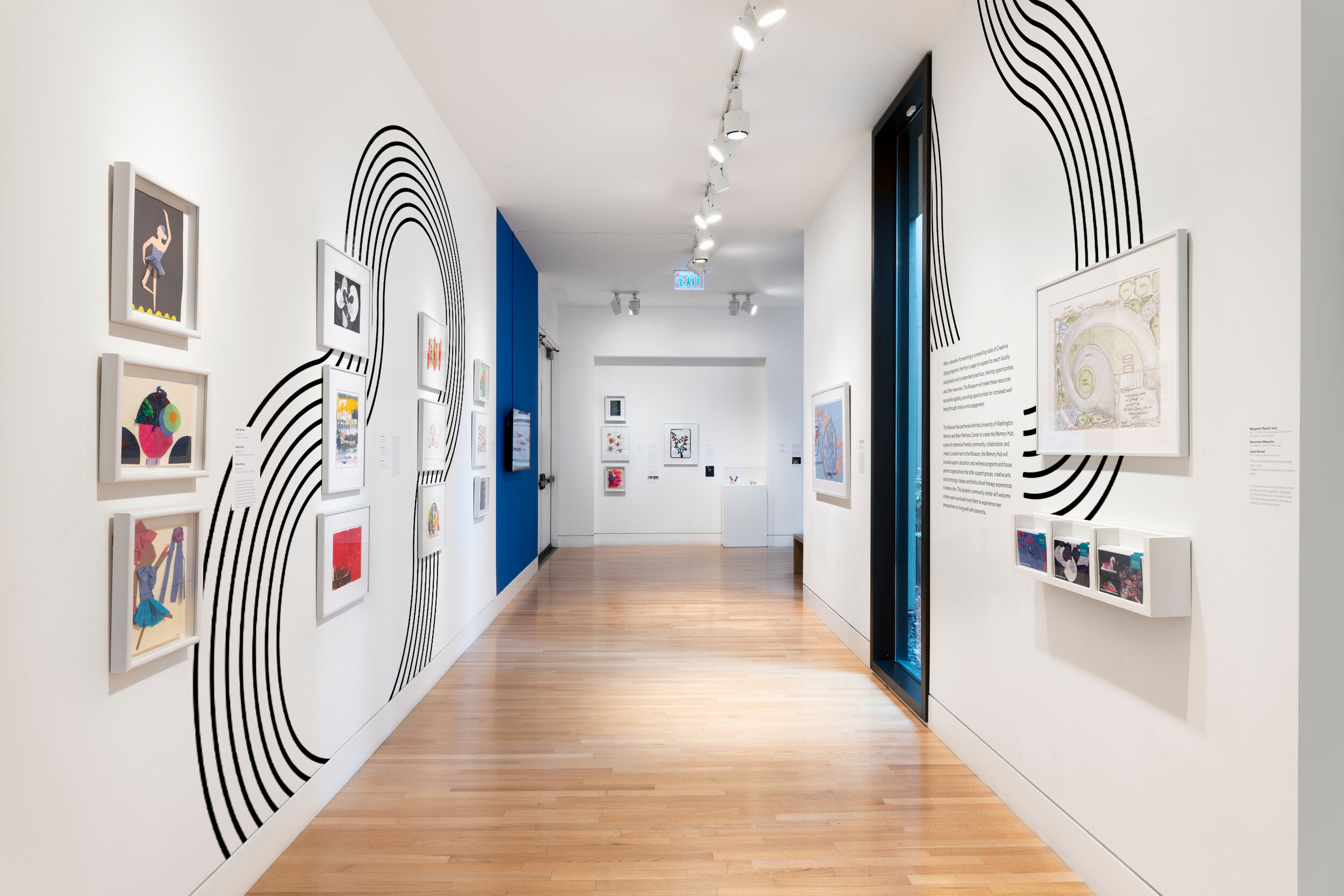 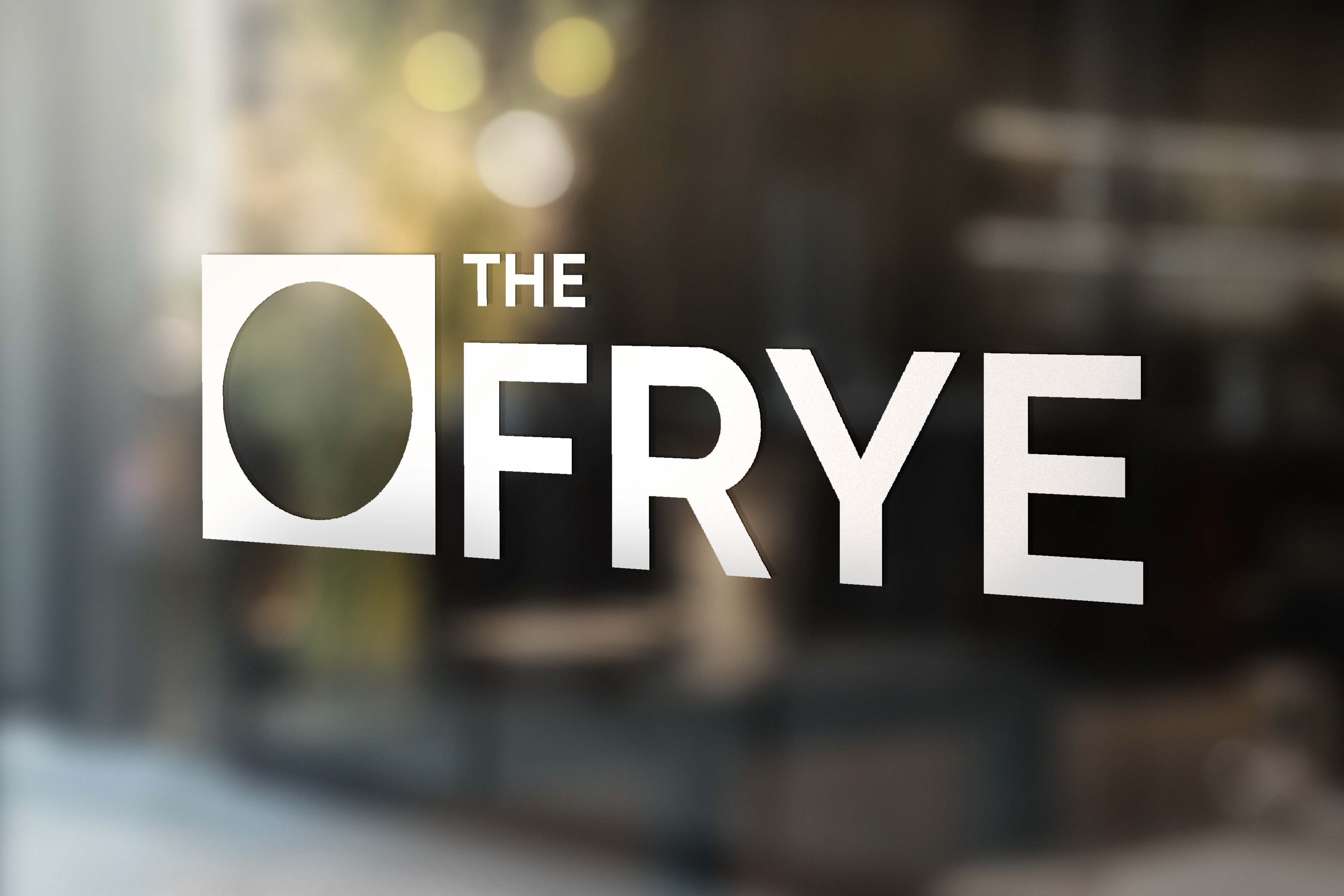 Finally the Frye home page got revamped with the new brand colors, brand mark, and brand elements and was restructured to be more engaging and accessible for the user.

The Frye, however, has steadily been catering more to their secondary audience, which consists of people who are just getting interested in art and art education. This audience is generally younger, more diverse, and less interested in traditional art exhibitions. 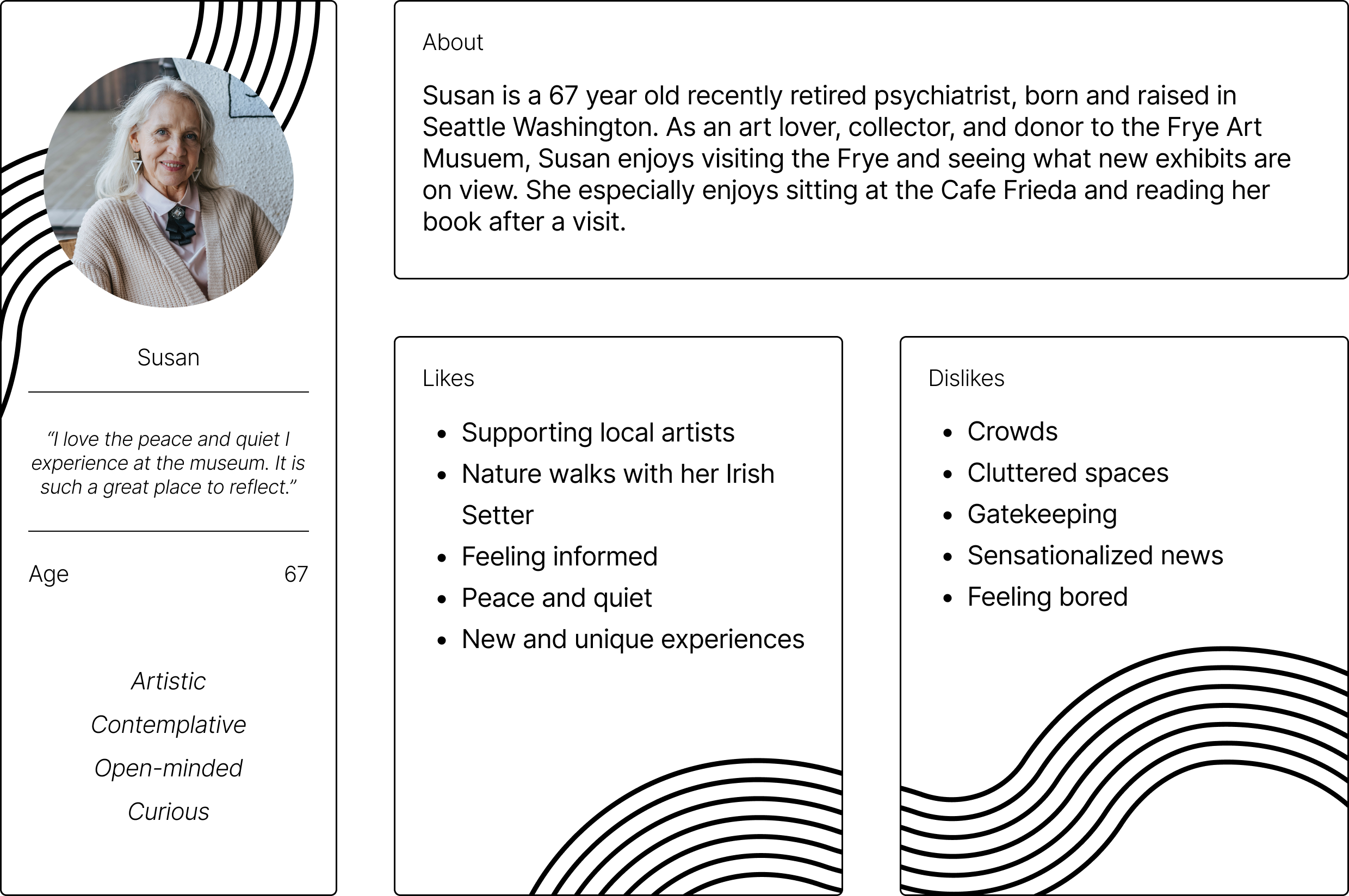 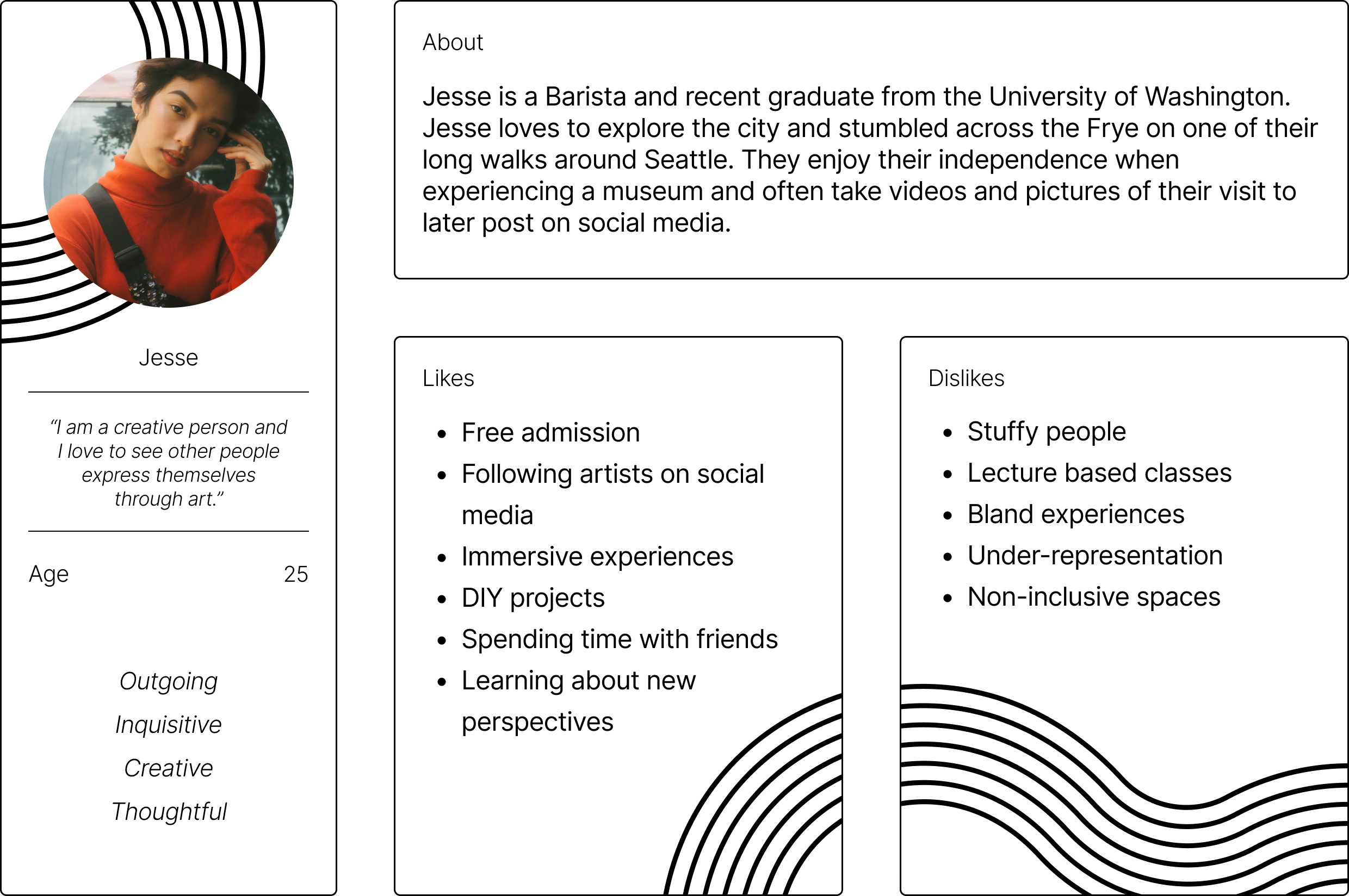 After an in-depth research and discovery phase, the primary attributes of the Frye were established: Thoughtful, Contemporary, and Inclusive. From these attributes comes the tagline and concept: “Open Space, Bold Ideas.” Open space refers to the inclusive nature of the museum, represented through windows that highlight the bold artwork. Bright colors and large shapes situate the Frye within a contemporary art museum context. And finally, meandering lines represent the thoughtful and contemplative paths taken through an art museum and connect widely varying artworks. 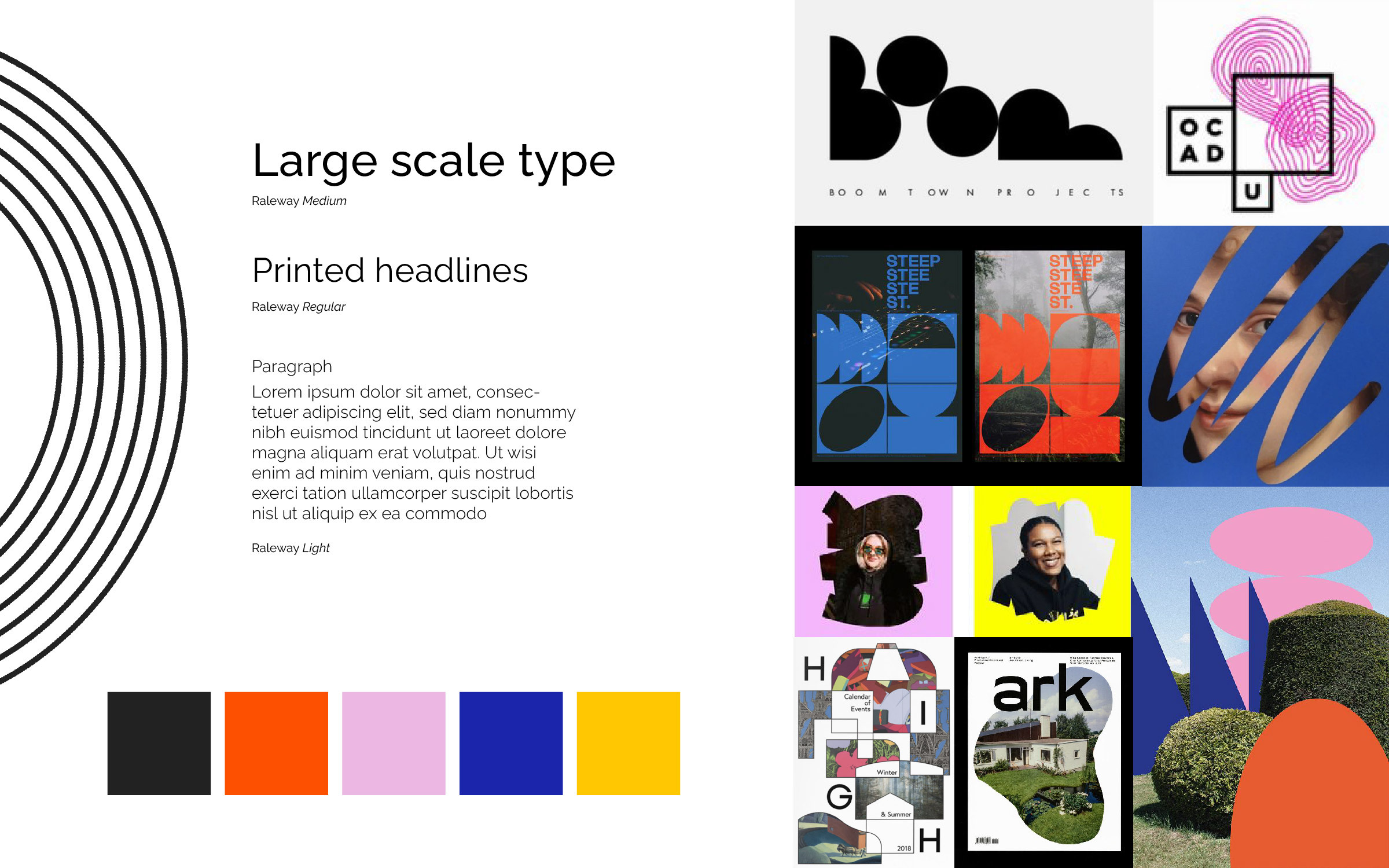 The brand mark for the Frye is set in a clean and contemporary font with a heavier weight. The accompanying icon functions as a spotlight, referencing the Frye’s mission to highlight local and contemporary artists. Together, the icon and word mark create a dynamic and personal identity for the Frye.

One of the challenges when branding for an art museum was: how do you make a cohesive brand around a business that showcases vastly different pieces without omitting the art from the branding? And how do you show the artwork in a way that fits within the brand while making sure the overall design promotes brand recognition? This is why the branding was split into two avenues with specific usage rules for each.

Deliverables would either use the “brand forward” style or the “art forward” style. The “brand forward” style is used for brand recognition when talking about the organization as a whole and positions the Frye as a contemporary art museum. It highlights one, central, bold shape from the shape library in one of the brand colors and is accompanied by the logo and often the tagline. The “art forward” style, on the other hand, highlights specific artists’ work and is used on limited-edition merchandise and in advertising for exhibitions and artist showings. The shapes are used as a window or frame to bring attention to the artists’ work, and the flowing lines function as “connectors” that bring these diverse pieces together, just as a museum does. 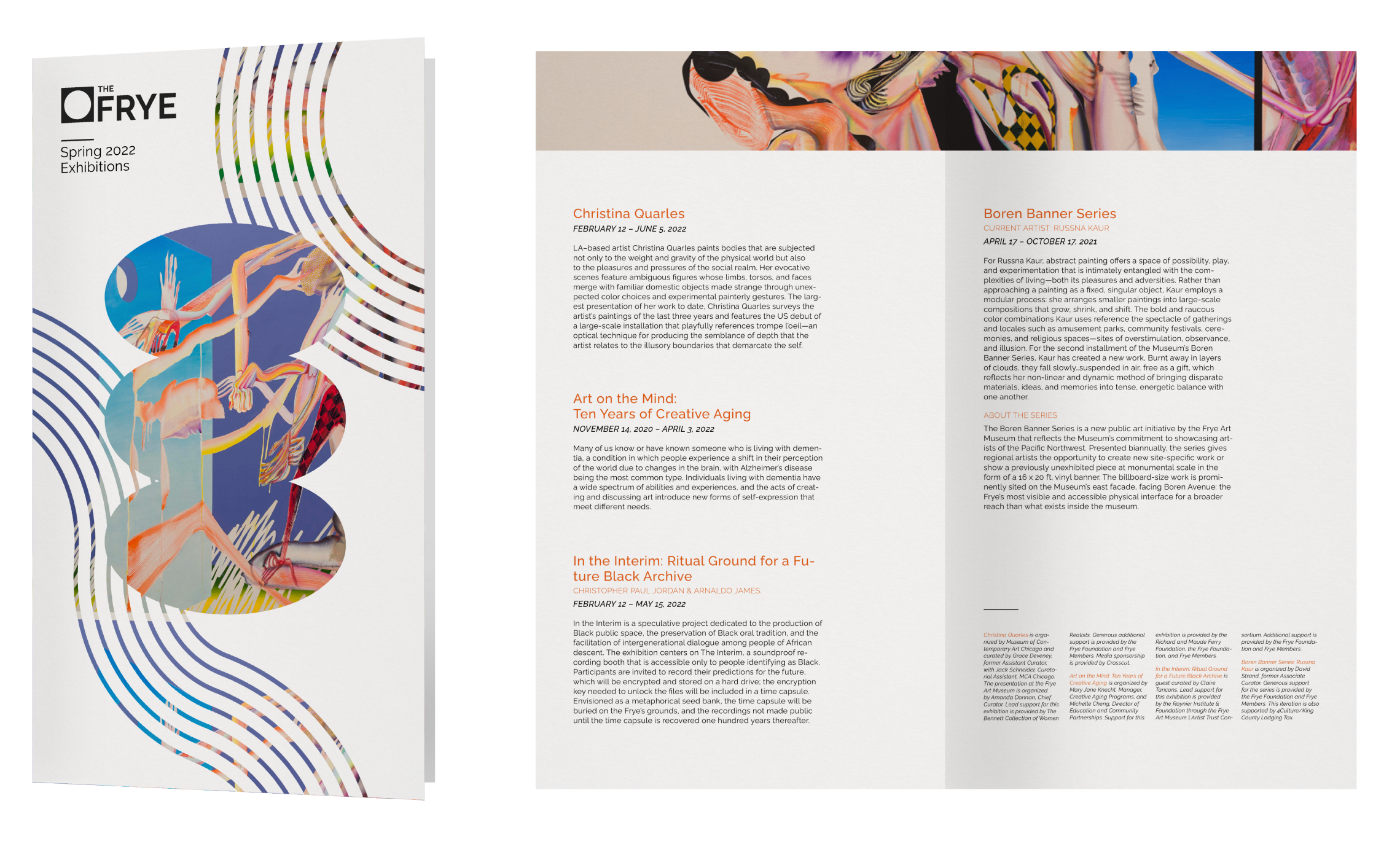 This rebrand was successful because it was designed to emphasize the Frye’s core value of inclusivity and commitment to highlighting artists’ work. Updating the brand to reflect the bold and contemporary work that the Frye exhibits opens the museum to a broader audience. The flexible brand system promotes brand recognition and acknowledges the reason why people visit art museums: to view beautiful artwork.